Born in Brazil, now living in the United States, but representing Latvia

Laura Rizzotto is a 23-year-old singer and songwriter born in Brazil, with a Latvian father and a mother of Portuguese origin. Laura wrote her first melody at the age of 11, and since then she has published more than 100 original songs.

She began appearing on the Rio de Janeiro music scene at the age of fifteen. Her first record deal with Universal Music Brasil came out a year later when the recording company’s CEO saw him live. Her debut album, Made in Rio, was released in 2011. Shortly afterwards, Laura received a scholarship to attend the Berkeley College of Music and moved to Boston.

Laura performs in various music venues and festivals in the United States and has recorded her second studio album, “Reason to Stay,” in Los Angeles. In 2015, Laura moved to New York to attend the Columbia University Master’s Music Program, which was completed in May 2017.

2016/2017. Laura was hired by Sony Music to work as a Portuguese vocal coach of Jennifer Lopez.

The song Funny Girl qualified for the Latvian National Selection Semifinals for the next Eurovision Song Contest and will be included in Laurie’s forthcoming EP Amber, which will be released in 2018, celebrating the Latvian cultural heritage.

There’s no conspiracy ⁣ Behind the way two hea

“Nala, everything the light touches... is our ki

Ya girl gets to vote for the #GRAMMYs now!🎵😜

A dream come true... everybody, say hi to our new

#BlackOutTuesday 🖤🙏 please take some time to 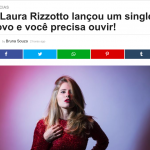